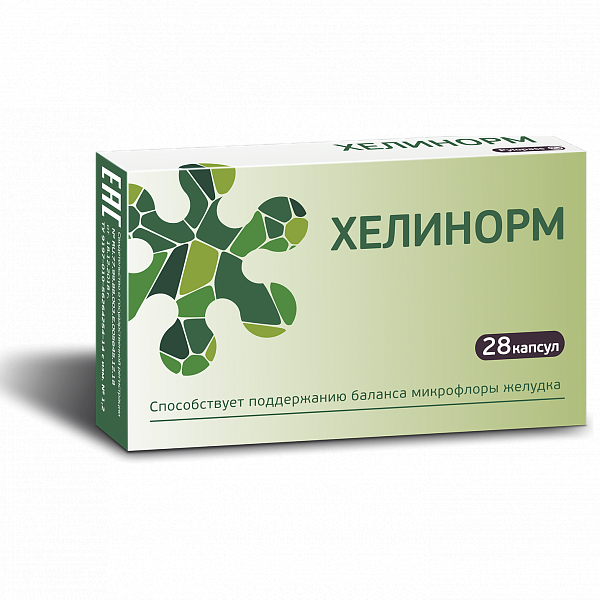 Discomfort, heaviness and a feeling of “fire in the pit of the stomach” trouble a lot of people. But, despite the fact that almost everyone has their “proven” method to alleviate the condition to boast of, discomfort keeps coming back. It happens due to the fact that we ignore the possible cause of the discomfort. It is the Helicobacter pylori bacterium, which inhabits the stomachs of 70-92% of Russians1. Efforts should be focused primarily on fighting against it. Helinorm – an innovative2 preparation based on the patented2 PYLOPASSTM*substance – has been developed specifically for protection against Helicobacter. It is derived from a special strain of lactobacilli with sensational properties discovered by German scientists. Helinorm is a dual-purpose preparation. Firstly, it is “feared” by the malicious Helicobacter bacterium and, secondly, it contributes to sustaining normal microbial balance and digestion in the stomach.3 Today products based on the PYLOPASSTM*substance are available in 30 countries of the world. And there is only one such preparation in Russia and that is Helinorm.4

PYLOPASSTM* is a “quick-response-to-Helicobacter” substance containing lactobacilli metabolites. Once in the stomach, it immediately3 begins to exert its properties. Through special receptors, PYLOPASSTM* binds to Helicobacter, after which the newly formed “tandem” is naturally excreted.3

Of course, protection from Helicobacter is Helinorm’s key property and yet not its only one. A complex approach helps preserve stomach health, but the preparation has one more important feature: it contributes to sustaining normal microbial balance and digestion in the stomach3.

Helinorm does not have contraindications, except for individual intolerance.3 It can be taken by pregnant and breastfeeding women and even children over 6 years old3,5.

Be proactive: do not wait until gastric discomfort makes itself felt again!

Research has shown that even a fortnight intake of PYLOPASSŇĚ* contributes to controlling the level of Helicobacter in the body. However, it is very important to complete the entire course of administration: 28 days. After its completion, the result lasts for 6 months.

You can purchase Helinorm in any brand pharmacy of the Evalar chain and in other pharmacies of the country. And you can always find it in Evalar’s Fitomarket Healthy Life Store as well.

1 Zimmerman Ya.S. Critical analysis of concept of the Helicobacter pylori infection’s leading role in the development of gastroduodenal diseases // Clinical Pharmacology and Treatment. 2019. Ň.28. No 2. pp. 19–27.

4 According to the state register for registered dietary supplements as of 15.11.2020.

5 After a consultation with a specialist.

DIETARY SUPPLEMENT. NOT A PHARMACEUTICAL.